New Report Finds Network Performance During COVID-19 Was a Success

A new report by the expert Broadband Internet Technical Advisory Group (BITAG), a multi-stakeholder organization composed of engineers and technologists from various sectors across the internet ecosystem, highlights how the internet rose to the challenge of huge traffic surges during the pandemic and continues to perform well as millions of Americans continue to learn and work from home.

The report, "2020 Pandemic Network Performance," co-edited by NCTA Vice President of Broadband Technology Matt Tooley and DISH Network Senior Engineering Program Manager Kate Landow, examines from a holistic view the data available on internet traffic patterns and network performance and asserts that the internet's resiliency is a "testament to the importance of continued investment in robust internet infrastructure in all parts of the ecosystem ... "

Since the onset of the COVID-19 pandemic in March 2020, NCTA has been collecting and reporting network performance data from America's leading internet service providers (ISPs) through the NCTA COVID-19 Internet Dashboard. The dashboard continues to reveal that cable broadband networks have been a reliable infrastructure that met the biggest stress test ever imagined. The new BITAG report further supports these findings and delves deeper into how the increased demand affected the internet and how organizations, such as ISPs, responded in turn.

A few of the report's highlights include the following:

In reference to the last point on home Wi-Fi networks, the report recommends that internet users experiencing performance issues examine their home networks, particularly their devices and Wi-Fi equipment, because many times poor performance was found to be linked to outdated equipment in need of upgrades.

BITAG's overall findings indicate that the American internet was and continues to be a success story during a difficult time. Millions of Americans had quick and smooth transitions to working and learning from home in terms of connectivity. As BITAG states, "If [the internet] had collapsed there would have been numerous reports of internet users having trouble getting online, slow page loads, aborted or failed videoconferencing sessions, streaming video quality issues, and other issues. Nor did we find any data that supports that there were widespread issues." ISPs jumped into action when the shift-to-home caused a surge in internet traffic in a short period of time, and thanks to their significant investment in their broadband networks over the past couple of decades, Americans found a way to continue a semblance of their lives online. 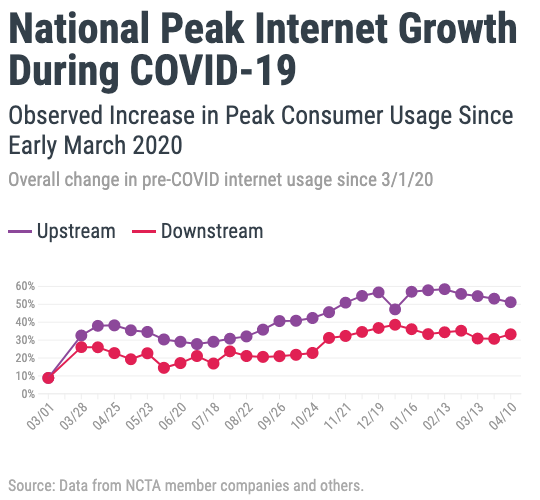 To check the latest findings on nationwide network performance during the pandemic, go to the NCTA COVID-19 dashboard.

What Cable's Broadband Network Performance During COVID Means for America