The Asymmetric Nature of Internet Traffic

Since the beginning of the internet, residential broadband traffic has been asymmetric in nature, as users generally receive far more information (streaming for instance) than they send (uploading photos to Facebook for instance). Network engineers early on recognized that residential customers were primarily consumers of information, not producers of information, and designed broadband service to favor this consumer behavior.

In fact, over the last decade the average downstream-to-upstream traffic ratio has grown from 3:1 in 2010 to over 14:1 by the beginning of 2019.

In 2020, as the pandemic resulted in millions of consumers working and learning from home, broadband internet service providers faced an unprecedented spike in traffic. Since March 2020, cable networks have seen a 30.8% growth in downstream traffic and a 54.8% growth in upstream. Despite these extraordinary changes, the internet continues to perform well. 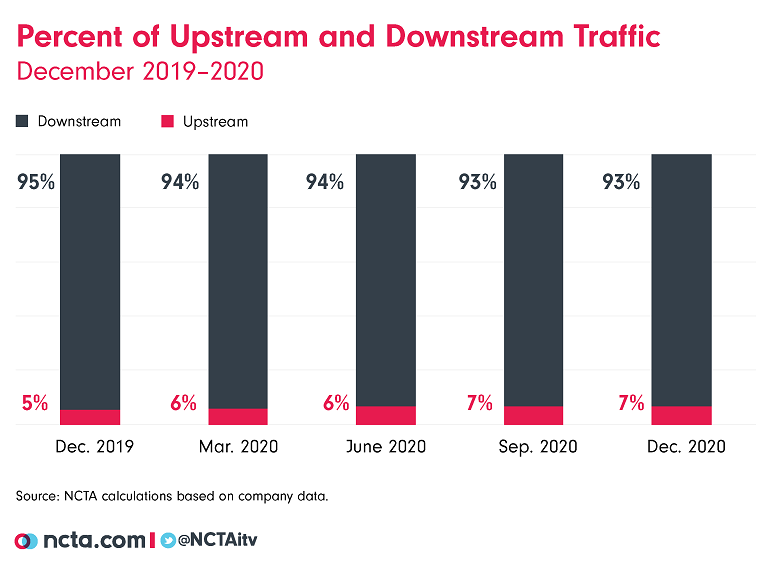 What is driving all of the downstream? Not surprisingly, video streaming is the king of internet traffic. One cable provider reported that video streaming traffic grew 70% in 2020. And while video conferencing was growing anywhere from 300-700% over its pre-shutdown levels, that traffic still accounts for less than 5% of overall network traffic.

The bottom line is that the overall consumption of broadband has been and will continue to be significantly asymmetrical.