What exactly is a 10G Smart Home? To put it simply, it is the home of the near future, where every device connects seamlessly and where the kinds of next-generation experiences that were once unimaginable are made possible by an ultra-fast 10 gigabit speed internet connection. Now, there is a real-life model of what 10G, the cable industry's initiative to deliver internet speeds that are 10x faster than today's networks to households across America, has in store for consumers. The Mediacom 10G Smart Home was unveiled yesterday in Ames, Iowa, for a tour, and represents the first U.S. field trial of the 10G platform.

The home functions as a working technology laboratory for Mediacom to test next-generation applications and products, all of which require high-bandwidth capacity. Essentially, the house demonstrates all of the possibilities that 10G will unleash, including telemedicine, distance learning, remote work, and virtual entertainment experiences. 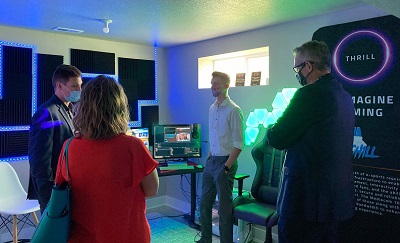 "The cable industry's commitment to bringing world class technology to American homes and businesses was on full display today in Iowa," said NCTA President and CEO Michael Powell. "Mediacom's groundbreaking 10G field trial is the latest example that our member companies are delivering an exceptional national infrastructure that will inspire American ingenuity for generations to come." The tour of the Mediacom 10G Smart Home for local officials was conducted in partnership between Mediacom, NCTA and CableLabs.

This is not the first time that Mediacom, which serves states primarily in the Midwestern and Southeastern regions of the U.S., has launched a groundbreaking gigabit initiative. Three years ago, the ISP was the first to deploy 1 gigabit broadband to an entire state, making Iowa the first gigabit state in the country. "Similar to our rapid deployment of 1-Gig across our national network in 2017, the beauty of 10G is that it's extremely scalable within our existing network infrastructure," said Mediacom Chief Technology Officer JR Walden.

Currently, cable ISPs offer 1 gigabit service to 80% of U.S. homes. To get to 10G, ISPs are using the fiber-rich infrastructure that already exists to continually upgrade their networks as consumer demands grow and evolve.

Mediacom worked closely with CommScope to bring the 10G laboratory concept to life, with CommScope providing the broadband architecture and network solutions to connect all of these applications in the home together, as well as a 10G performance app. In total, there are over 70 inter-enabled devices in the home, many of which have bandwidth-intensive applications, such as the Samsung QLED Smart 8K ultra-high definition television.

"Some of these emerging technologies were once thought of as science fiction, but now they're on the cusp of reality," said CableLabs CEO, Phil McKinney. "What Mediacom was able to do with this demonstration was give consumers a glimpse of the unbounded innovation the 10G platform will drive in the years ahead."

Stay tuned for more news on the Mediacom 10G Smart Home and the cable industry's 10G initiative in the coming weeks.

10G Gains Ground in Bringing Americans the Home of the Future