Broadband Prices Decreasing Versus Other Goods Despite Wider Inflation Pressures

With the nation’s latest inflation numbers released today, Americans again got a glimpse of pricing pressures that are still plaguing the economy. Consumer demand and continuing supply chain challenges brought on by the pandemic are resulting in rising prices for things such as used cars, fuel and food.

But amidst such dark clouds, the market for broadband services remains a bright spot. As the Bureau of Labor Statistics Consumer Price Index in March makes clear, broadband prices are fortunately not mirroring the radical price jumps in other sectors. Put simply, while much of the economy has seen significant prices increases, internet price changes have been modest and are increasing at rates well below many other goods and services that are driving up inflation. 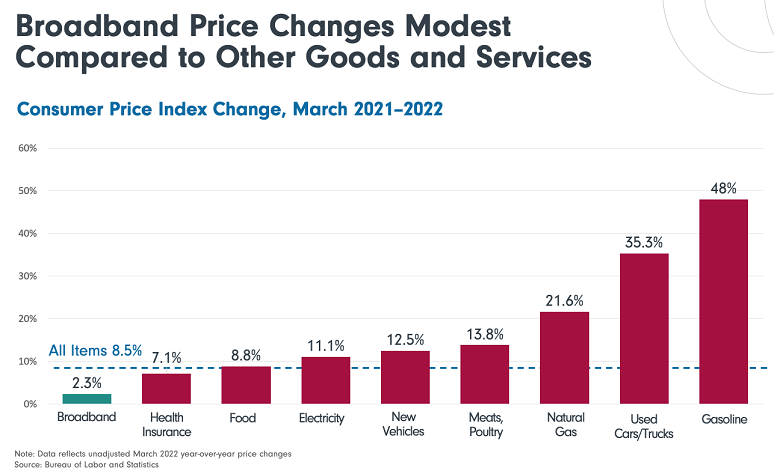 This news is particularly noteworthy given the sharp increase in demand for and use of broadband services that America has experienced during the pandemic. Over the past two years, internet traffic has increased significantly but networks have met the incredible surge because providers planned ahead for spikes in demand and have increased the level of network upgrades, expansion and other actions to shoulder the additional load. Yet over just the past year, on an inflation-adjusted basis, there has been a 5.7% decrease in the price of internet services, with the size of this decline even increasing throughout the year.

Simply put, as the American economy continues to face unprecedented inflation, the price and quality of broadband services is a reason for optimism.

What Is Unlicensed Spectrum and How Does It Contribute $95.8B Annually to the Economy?