Today is World Environment Day, a global awareness day started by the United Nations. It's also the perfect time to celebrate the ongoing green efforts throughout the cable industry that are making a nationwide environmental impact.

Earlier this year, NCTA, along with all of the largest pay-TV providers and energy efficiency advocates announced a four-year extension of the award-winning Voluntary Agreement for Ongoing Improvement to the Energy Efficiency of Set-Top Boxes (VA). The landmark agreement has saved consumers more than $3 billion and avoided millions of metric tons of CO2 emissions since 2013, and additional savings are expected to reach $1.6 billion annually once the even more rigorous energy-saving commitments of the extended agreement are fully implemented. 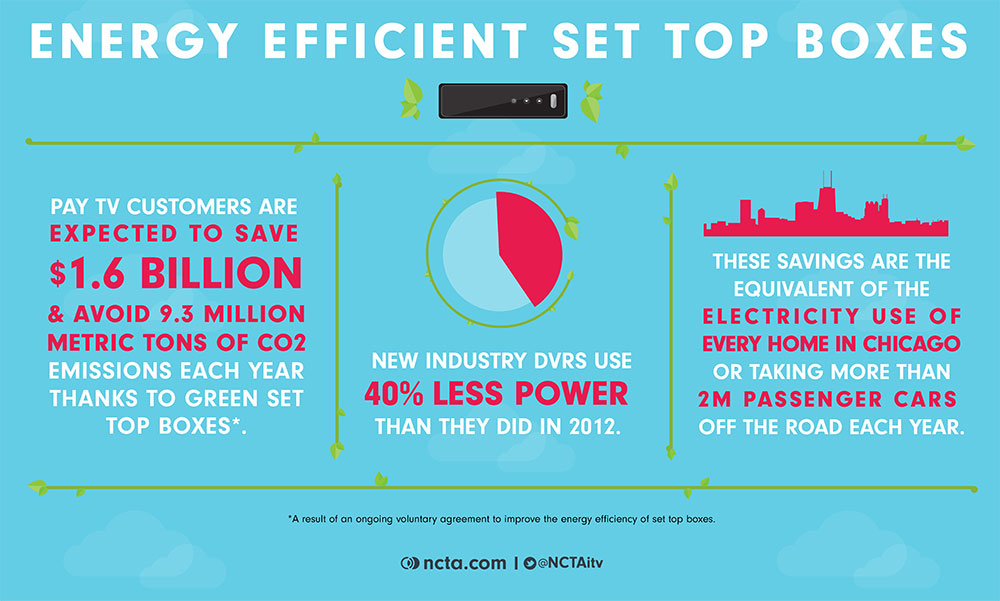 In 2015, NCTA built on this success by leading all of the nation's largest broadband internet service providers and major manufacturers in the establishment of a second Voluntary Agreement for the "Small Network Equipment" used by consumers to connect to the internet, such as modems and routers provided by service providers and also sold by manufacturers at retail. Every day, millions of Americans enjoy connecting to the internet, and they increasingly demand faster internet speeds and more robust Wi-Fi to support an ever-growing number of devices in their homes. Since 2016, more than 98 percent of the small network equipment purchased by providers and sold at retail have met the energy-efficiency levels set in the VA, and as their efficiency has increased, their energy usage per megabit of service delivered has declined significantly.

Another important initiative that is helping to raise awareness around energy savings is the SCTE•ISBE Energy Management Program—Energy 2020. While the VAs focus on energy efficiency in customers' homes, the cable industry launched its Energy 2020 program in 2014 with the goal of reducing the energy consumption of the cable operators' networks, vehicle fleets and administration by 20 percent by the year 2020. Energy 2020 also supports operators and vendors in pursuing green energy technologies such as solar and fuel cell generation.

Cable operators have long been committed to reducing the environmental impact and the costs associated with energy consumption. The industry's green efforts continue to evolve as innovators come up with new and holistic ways to address and raise awareness around energy efficiency. Stay tuned.

For more information on the energy efficiency voluntary agreements, go to https://www.energy-efficiency.us/.