Every two years, WICT and NAMIC—the cable industry's associations representing women and people of color—conduct a study that measures diversity demographics within the workforce according to factors such as pay equity, advancement opportunities, and resources for work/life integration. The 2019 AIM/PAR Workforce Survey initial results were revealed during the industry's Diversity Week last week in New York City, and demonstrated steady strides in a few key areas since 2017. These included increases in the percentage of people of color in the industry, and higher rates of women rising to executive and senior-level positions. Notably, these industry improvements surpass the national benchmark in several areas when it comes to diversity make-up in the workforce.

Supported by The Walter Kaitz Foundation and administered by Mercer, the study is designed to evaluate progress and determine important changes needed to move forward. While work remains to be done particularly in retaining women and people of color, as well as in the promotion rates for people of color—where the results remained flat or lacked improvement—the overall data is encouraging.

A few of the highlights include:

"Knowing where women and people of color stand is step-one in ensuring progress," said WICT President & CEO Maria Brennan in a statement. "As the survey results show, for women, closing the gaps in hiring and employee retention are central to achieving parity with men."

NAMIC President and CEO Shuanise Washington also remarked that people of color are clearly making advancements in the industry, but the work is far from over. "Companies need to shift from focusing solely on diversity to also focusing on inclusion. That's where you are going to start to see real progress because diversity without inclusion is not effective in the long term," said Washington.

The organizations that participated in the survey represent more than 75% of the industry workforce, and the data collected every two years has proven to be a critical component to the industry's diversity and inclusion efforts. WICT and NAMIC have been measuring cable workforce demographics for over a decade, and have used the study to form best practices around diversity and inclusion, to offer a variety of mentorship and professional development opportunities for women and people of color, and to create campaigns that promote a more diverse and inclusive workplace culture.

See the graphic below to see how the industry is faring in terms of diversity and inclusion in the workforce. The full comprehensive report will be released at the end of the year. 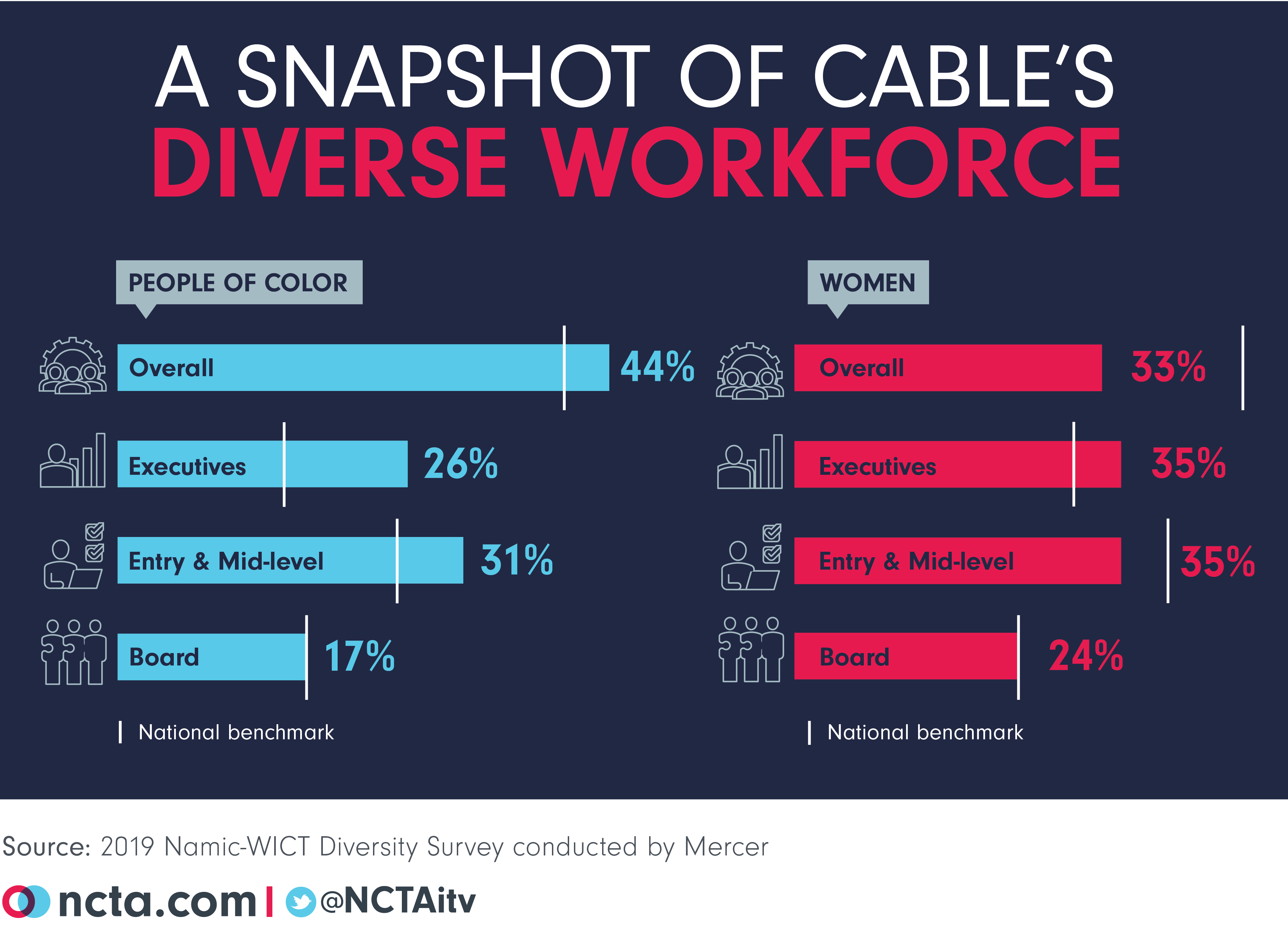