Back in 2009, binging a TV show usually meant buying each season on DVD and watching every episode on a TV or laptop with a DVD drive. Maybe if the show was new enough, it would have full seasons available for purchase on iTunes. Or perhaps you were able to find old episodes on-demand to catch up on the latest season. But for the most part, the TV watching experience looked a lot like it had for decades; tune in on time or record the episode to watch later.

The next decade would change how we watch and even think about TV. Disc drives have mostly been phased out of computers, and many people would be hard pressed to name the last DVD or CD they bought. Today, at the end of 2019, TV lives in our pockets, in the cloud, and independent of a timeslot schedule. TV shows are written and produced to be binged in a short amount of time, transforming them from short installments spaced out over time to 10+ hour long sagas exploring complex issues. Other shows, however, might be better suited to be consumed on a train ride home from work. TV went from something people scheduled their lives around (can’t miss Mad Men after all) to something they happily fit into their schedules. 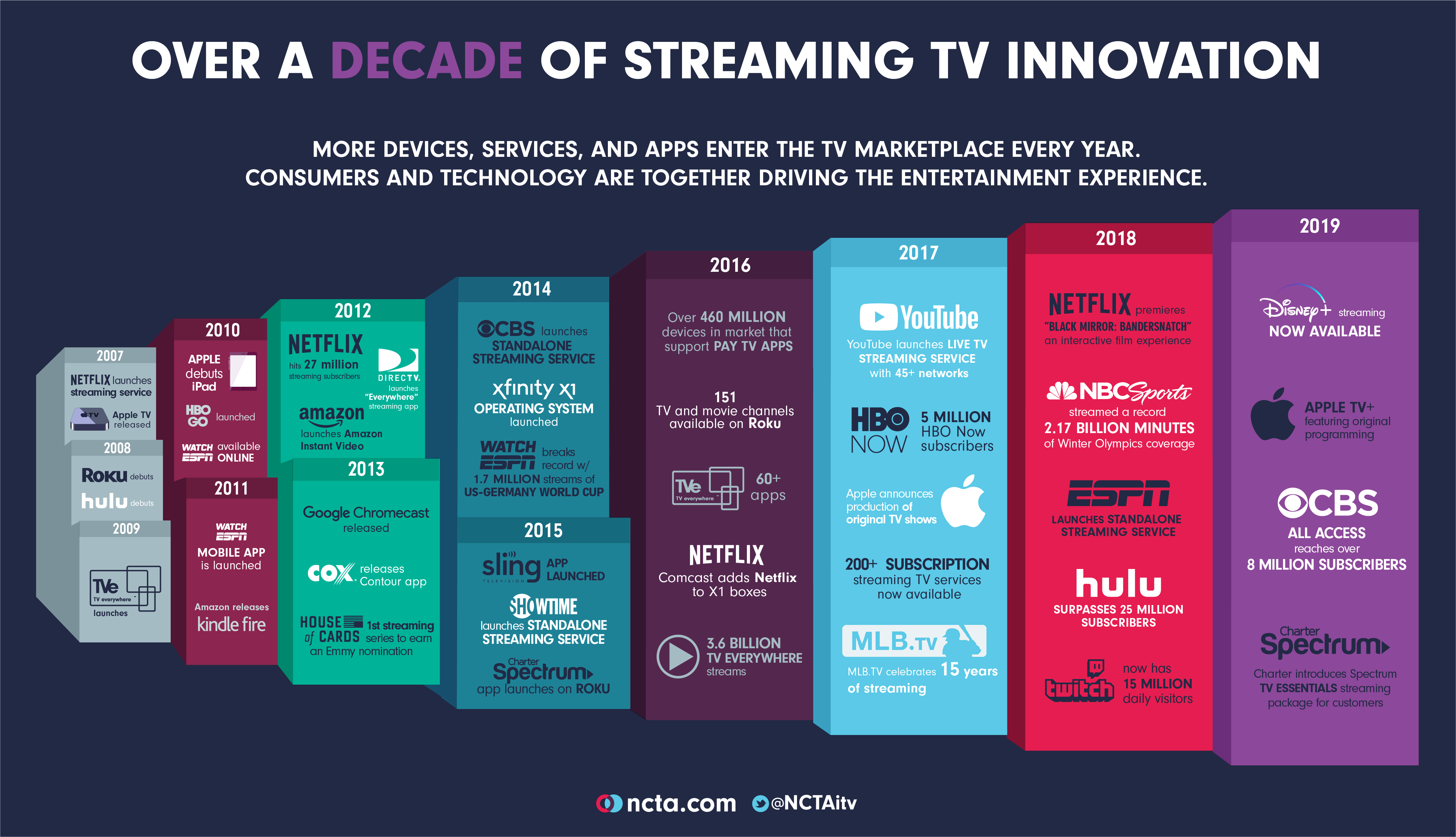 Those changes didn’t happen by accident—they are a reflection of the shakeups in the TV and video market. Faster, more robust broadband speeds became available to more people, which meant that higher quality video files could be delivered online. Companies like Hulu gave viewers a place to watch their favorite TV shows on their own schedule. Others followed suit, and new technology platforms began to emerge to deliver programming to TV sets, making the TV market even more competitive. Networks like ESPN and HBO were at the forefront, releasing products that let subscribers watch on their devices as early as 2010, years before streaming sticks hit the market.

The TV renaissance has given us more scripted original programming than ever before, higher quality shows, and more options to watch shows whenever, wherever. Just take a look at the countless “best TV of the decade” lists to see how television itself has grown as a form of nuanced storytelling. As the decade comes to a close, it’s impossible not to wonder what the 2020s might have in store. As VR and AR technologies continue to improve and things like 10G get built out, could viewers go from passive to active participants in their favorite programs? Only time will tell, but either way, it sure is an exciting time to be a TV fan.