A robust internet connection has become indispensable in our lives. During the COVID pandemic, America’s broadband networks performed resiliently even during historic surges in internet traffic when many companies and schools went entirely remote, according to performance tests and reports. But besides powering our digital lives, it’s important to ensure that broadband is meeting consumer expectations and evolving in the right direction.

Fortunately, recent consumer polling demonstrates that the majority of Americans are highly satisfied with their internet service, according to a survey conducted by Morning Consult. First, the survey found that more than 84% of adults reported having broadband internet at home. And notably, 85% of those people gave a positive rating for their home internet service.

To break it down further, four in five adults reported satisfaction with tested aspects of home internet service, including internet reliability, connection quality, signal strength, security, and speed. Even better is that these satisfaction numbers have increased by an average of 7% since 2019.  So as internet usage has increased, home broadband continues to deliver what consumers need.

Cable internet service providers (ISPs) have invested hundreds of billions of dollars over the past couple of decades in building robust and reliable networks that power and support multiple connected devices and multiple users in one household simultaneously using the internet. These networks are constantly being monitored and upgraded, with the result being a seamless and secure internet experience, and most importantly, satisfied Americans.

To stay even further ahead of demand, cable ISPs are already focused on bringing 10 gigabit speeds to homes across the country in the coming years. While the majority of households don't require those kinds of speeds just yet, future-focused planning is what enabled cable broadband networks to keep America moving during the pandemic, and will prepare them for whatever the future holds. 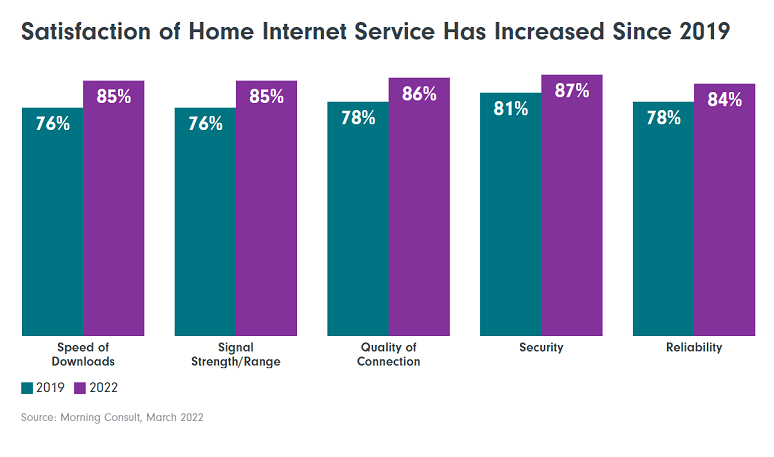