More than two-thirds of TV viewers say that the TV programming they watch reflects people of different races, ethnicities, gender and sexual orientation, according to a recent poll from Morning Consult. Specifically, the survey asked whether viewers considered the actors seen on TV shows to be of diverse backgrounds, to which 68 percent responded agreeably. The survey also asked viewers whether they are able to find shows that speak directly to their backgrounds and lifestyles, and 70 percent answered yes.

These findings seem to reflect the impact of the growing number of new TV shows in recent years from cable networks that prioritize diverse casts and production teams.

While there’s still work to be done, Starz CEO & President Chris Albrecht pointed out during an interview at the Television Critics Association Winter Tour earlier this month that diversity on television has come a long way. "I've been in the premium TV category for over 30 years, and [one of the few shows] I remember before [Starz's] Outlander that targeted women specifically was Sex and the City, and that turned out pretty well," said Albrecht. "And it's the right thing to do [to prioritize diverse TV] because the programs begin to reflect the face of America." Starz is one network that has shifted its focus towards diversity storytelling in recent years, coming out with programming that targets Hispanic audiences like their upcoming show Vida, African-Americans with their hit series Power, and female viewers with female-centric themed shows like The White Princess.

At TCA, Showtime CEO & President David Nevins also attributed part of the network’s success in gaining new viewers to their efforts in diversity storytelling. “The last two months of the year have been the strongest two months in our history in terms of new subscribers,” he said, citing the network’s female-led comedy, SMILF, and The Chi, a drama series created by Lena Waithe, an African-American woman and leader in the LGBTQ community, as two of the shows that are helping to lead the way. “Voice matters,” he said “We’ve got in Lena [Waithe] and Frankie [Frankie Shaw—creator, director, and lead role in SMILF] two really interesting next-generation voices."

Representation of LGBTQ groups on TV has also made strides. GLAAD, the non-profit group that examines the portrayal of LGBTQ communities in media and entertainment, has been tracking the presence of LGBTQ characters on television for the past two decades through its “Where We Are on TV” survey. Every year has seen increases in the number of LGBTQ characters across cable networks, broadcast and streaming services. On cable TV alone, the number of LGBTQ characters rose from 142 in 2016 to 173 in 2017. Freeform and Showtime have shined particularly bright in this category and are leading the way by introducing characters and storylines inclusive of all types of sexual orientation.

The demand for female-driven storylines, minority casting and direction, and LGBTQ plots on television are being taken seriously, and viewers are noticing. If anything, this latest survey conveys that audiences are finding programming that resonates and speaks to their personal perspectives and backgrounds. 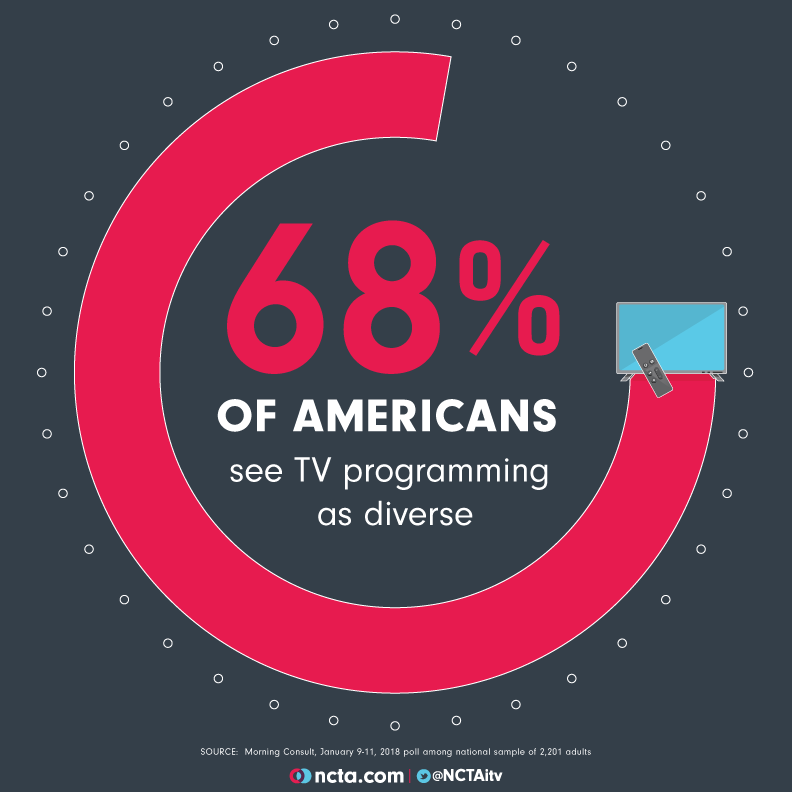 Note: Morning Consult conducted this poll for NCTA from January 9-11, 2018, among a national sample of 2,201 adults. The interviews were conducted online and the data were weighted to approximate a target sample of adults based on age, race/ethnicity, gender, educational attainment, and region.