The array of connectivity benefits that Wi-Fi provides to millions of people as they go about their daily lives is unequivocal, but the technology is also contributing to the nation's growth in another major way. According to a new report, unlicensed Wi-Fi spectrum added $525.19 billion to the U.S. economy in 2017. The study, commissioned by WifiForward, found that the economic value of unlicensed spectrum has increased by 129 percent since 2013, and predicted continued growth through 2020.

Meanwhile, other unlicensed spectrum technologies, such as video game consoles and intelligent personal assistants, contributed far more value than even just a few years ago.

The report also forecasts that the economic value of unlicensed spectrum will continue to grow at a rate of seventeen percent per year and will reach $834.48 billion by 2020. The deployment of 5G networks and the contribution of IoT will be key in driving this development.

But this prediction of growth and innovation is very much contingent on whether additional spectrum is designated for unlicensed use, the report emphasized. The future possibilities for Wi-Fi connectivity and the widespread economic and societal benefits that it brings depend on access to sufficient unlicensed spectrum to support demand for existing technologies and to accommodate innovation.

See the breakdown below of how unlicensed spectrum is contributing to economic growth and the extraordinary value it could unleash in the next several years. 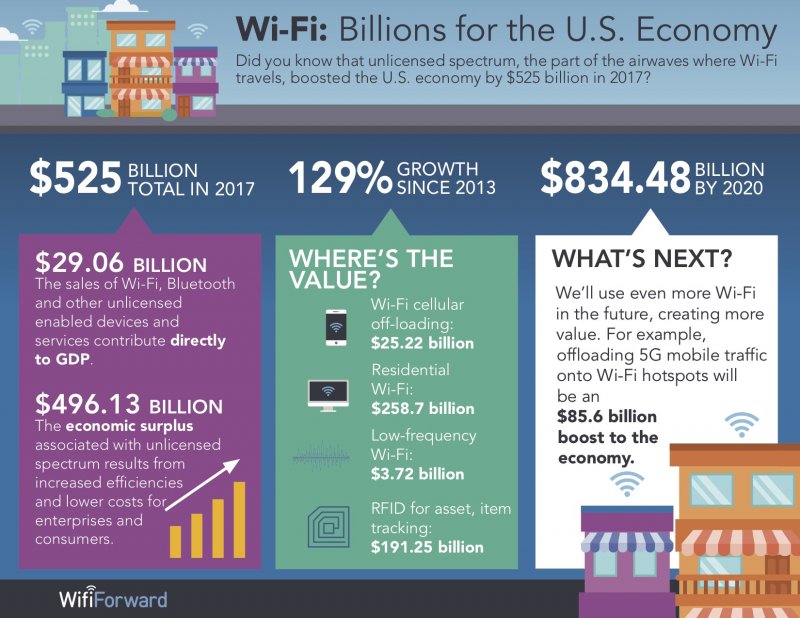