Some advocacy groups, like The Open Technology Institute (OTI), are repeating the assertion that prices for broadband service in the U.S. are significantly higher than in Europe and other countries around the world. That is just not true. And misinformation is not helpful to the critical discussion of how to get everyone in America connected.

The statements that advocates often make don’t hold up when the cherry-picked data is subjected to closer scrutiny. No amount of repetition or volume changes these false claims. The OTI report has been soundly debunked (more than once) including in a new paper by economists Mark Israel, Michael Katz, and Bryan Keating (“International Broadband Price Comparisons Tell Us Little About Competition or Affordability, and Do Not Justify Broadband Regulation”).

The authors identify numerous significant flaws with the OTI study and with two other studies from OECD and Cable.co.uk that advocates also periodically cite claiming U.S. broadband prices are higher. Katz, Israel, and Keating conclude that “all three studies suffer from serious methodological limitations and, in several respects, overstate U.S. prices. Thus, these studies do not support calls for the regulation of U.S. fixed broadband internet access providers or other forms of government intervention intended to address a perceived lack of competition.”

One major obvious flaw this new paper identifies is that OTI inexplicably excluded relevant data. For instance, while OTI often claims that the most affordable broadband service was provided by a government-operated network in Ammon, Idaho, their own report admits in the footnotes that it did not account for the fact that subscribers pay a $3,200-$3,600 fiber connection fee and an additional $16.50 per month in fees to the city.

But there are many more flaws. As the authors point out, OTI only compares prices from a non-random selection of just 14 U.S. cities to nine European and three Asian cities and it does not take into account bundled discounts; does not consider that providers in the U.S. offer lower priced plans for low-income customers; and ignores other charges like modem rentals. OTI also relies on outdated data. For example, the report cites a 2019 Comcast plan offering 150/5 Mbps service in Washington, DC for $39.99/month. But Comcast now offers a plan with 200 Mbps for $34.99/month.

Perhaps most importantly, no attempt is made to control for basic quality differences among broadband service offerings. For Washington, D.C., for example, the OTI study finds an average advertised monthly price of $70.72. It calculates this price by using a simple average, thereby giving equal weight to Comcast’s 150/5 Mbps (now 200 Mbps) plan for $39.99/month (which has a lot of subscribers) and Comcast’s 2000/2000 Mbps plan for $299.95/month (with not a lot of subscribers). Any attempt to compare plans without taking these large speed and price differences into account leads to false conclusions. Given that the U.S. surpasses most other countries in the speed tiers available to consumers, failing to control for these quality measures is naturally going to lead to U.S. prices seeming to be higher than in other countries.

Another important factor driving price differentials is the cost of providing service to various areas. Even using OTI’s own data, once speeds and population density are considered, U.S. prices compare quite favorably and are even lower than many cities around the world. For example, in cities in the OTI data set with population densities between 3,000 and 4,000 people per square kilometer, the average prices in Seattle and Los Angeles are $0.16 and $0.20 per Mbps, while the price in Amsterdam is $0.45 per Mbps. OTI’s report admits as much, burying on page 38 that “standardizing costs and speeds while also factoring in differences in population density reveals that U.S. providers on average advertise similar prices for similar speeds as European providers.” 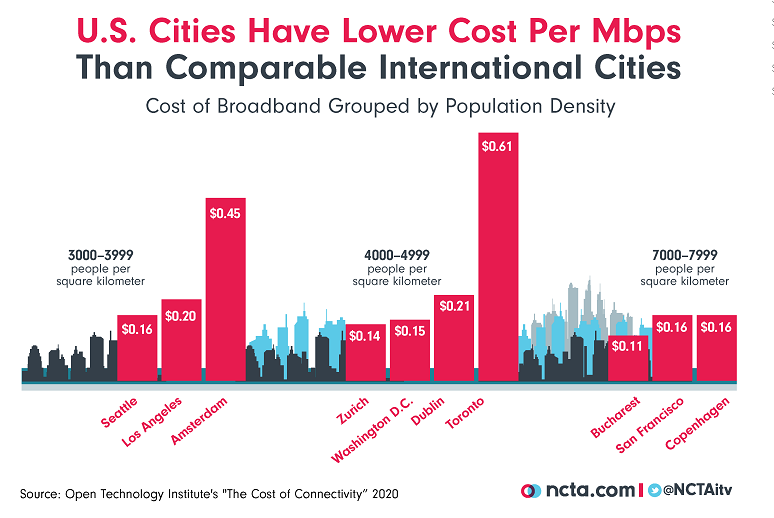 When looking at the cost of American broadband, if factors such as speed are included, U.S. prices have been falling dramatically. Based on NCTA’s analysis of the most widely purchased tiers of service, the quality-adjusted Price per Megabit per second (Price/Mbps) of cable broadband service has declined by 98% over the last 15 years, declining from $28.13/Mbps to $0.64/Mbps. 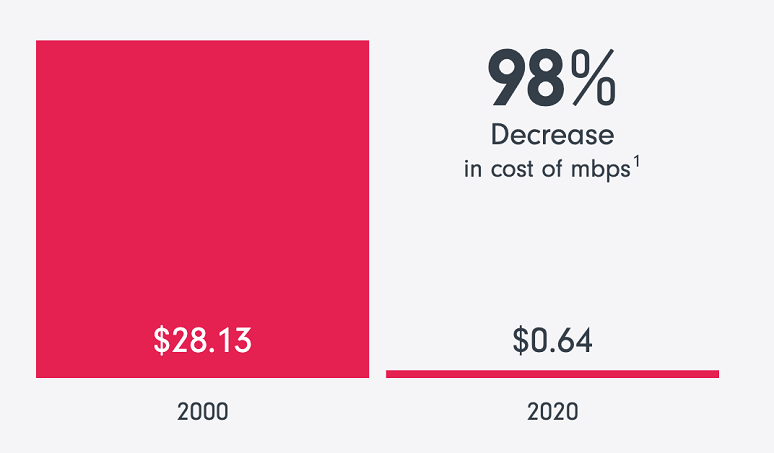 Similarly, U.S. Telecom found that, from 2015 to 2020, while overall prices in the U.S. increased 9%, the price for the most popular broadband tiers (adjusted for inflation) fell 28% and the prices for the highest speed tier fell 44% while speeds in both tiers increased.

The new analysis by Israel, Katz and Keating exposes similar significant flaws with the other two studies. Notably, they explain that the OECD study is based on out-of-date data, samples an extremely limited set of plans, excludes the prices of plans that are important to consumers, and does not account for differences in quality across countries. They conclude that “no credence should be given to the (OECD) study’s findings, and it does not provide a reliable basis for determining appropriate broadband policy in the United States.” Likewise, they conclude that “the Cable.co.uk study bases its comparisons on prices that do not adequately reflect consumer welfare, which renders its findings unreliable and means they provide no basis to impose regulation.”

Accurate data and sound analyses are essential as U.S. policymakers debate and seek to implement sensible policies to deliver broadband service to all Americans. So this new study’s critique of these three international broadband price comparisons is very timely and should help guide these important discussions. For as they rightly conclude, “In summary, these international price comparisons contribute little to sound analysis. Instead, reliance on these comparisons risks reaching misleading and counterproductive conclusions.”