New Report Says Fixed Broadband in the U.S. is Fast and Getting Faster

New Report Says Fixed Broadband in the U.S. is Fast and Getting Faster

In their latest Speedtest Market Report, independent internet testing group Ookla reveals that the average download speed of fixed wired internet in the United States has increased from 47.1 Mbps to 64.2 Mbps over the last year. Average upload speeds have also increased over the same period of time, from 15.4 Mbps to 22.8 Mbps. In the report, credit for this increase goes to cable providers who, according to Ookla, are “making all the necessary investments and infrastructure upgrades to roll out DOCSIS 3.1 and to the increased affordability of higher tiered packages.”

In addition to highlighting the increase in internet speed in America, the Speedtest Market Report also shares insight into the fastest ISPs in each region. Cable ISPs are the top provider in more cities than any other technology and Comcast’s Xfinity is the fastest provider in the U.S. as a whole. 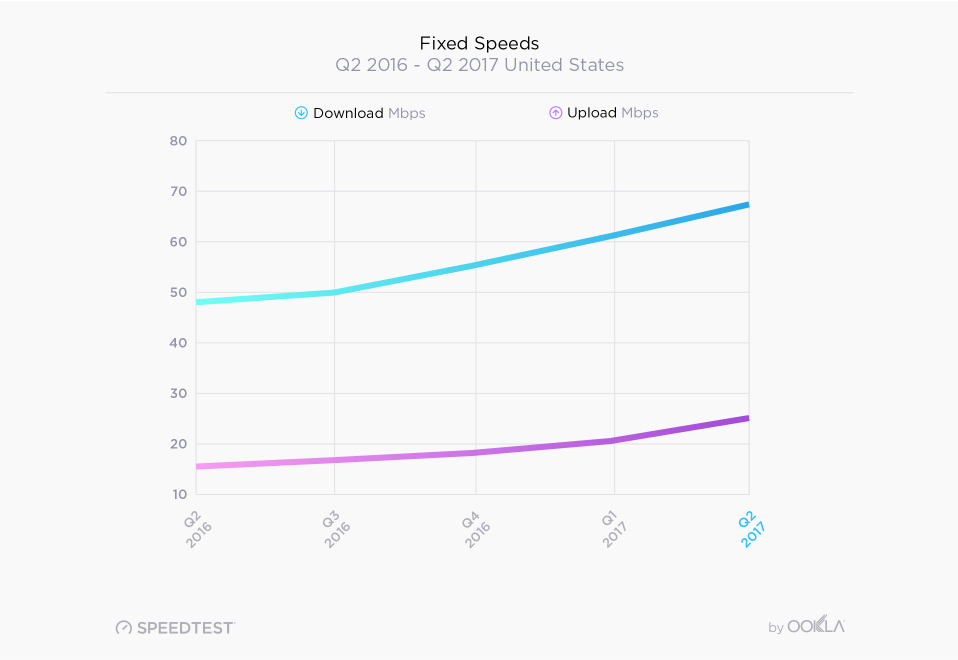 These ever-climbing speed numbers mean the networks that we’re building today are capable of handling not just what we need now, but what we’ll need in the future. Preparing for the Internet of Things, distance learning, telehealth, virtual reality, and even near-unimaginable future technologies requires infrastructure growth today, not in some seemingly distant future. Recent gigabit projects from Mediacom, Comcast, Altice, and others are highlight how getting a jump on super-speeds is leading to improved networks and better internet access.

Looking ahead, the Ookla Market Report predicts that DOCSIS 3.1 technology will continue to expand into marketplaces across the country and that “500 Mbps and 1 Gbps subscription packages will become widely available.”

You can see the full report from Ookla here.