Indigenous-Led TV Shows That Are Turning the Tide

With Indigenous Peoples' Day approaching this coming Monday, it's a good time to put a spotlight on three powerful shows that, over the past couple of years, have directed efforts to turning the tide for this underrepresented group in the entertainment landscape by casting Indigenous people as lead characters on the screen and lead writers and producers behind the scenes. TV networks continue to make diversity a priority, and through creating rich and inclusive programming, they strive to evoke an appreciation for people of all cultures, races, ethnicities, and backgrounds.

AMC's premiere of "Dark Winds" this past summer follows two Navajo police officers in the 1970s Southwest. The crime drama was shot at the first Indigenous-owned film studio in New Mexico, and the writers, actors, and production staff are mostly members of the Navajo Nation. The start of the series also marked for the first time in decades that filming of this scale has been permitted in Monument Valley--located in the sovereign Navajo Nation. "What I hope to see from 'Dark Winds' is just more doors opening, not only for indigenous talent in front of the camera, but also behind the camera," said Zahn McClarnon, the actor who plays the lead role of Joe Leaphorn and serves as an executive producer on the show.

FX's black comedy, "Reservation Dogs," became the first mainstream TV show in 2021 comprised of an all-Indigenous writers' room. The comedy drama, which follows the lives of four Indigenous teenagers in rural Oklahoma, aims to depict the real experiences of teenagers living on a reservation. To make the show as authentic as possible, the producers conducted outreach in Native American communities to find actors who could play the characters on the show. "The talent is there. It just doesn't happen to be on Hollywood Boulevard," said filmmaker Sterlin Harjo. 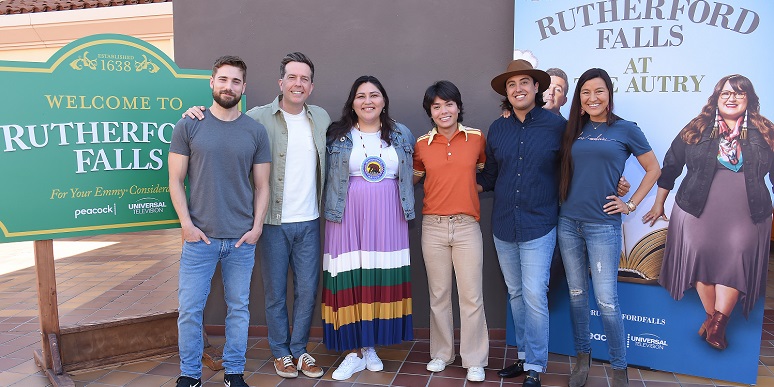 The sitcom, "Rutherford Falls," which runs on NBC Universal's streaming platform, Peacock, made history when Sierra Teller Ornelas became the first Indigenous showrunner with the show's premiere in 2021. In the fictional town of the show, Native Americans work in Rutherford Falls but live on their reservation bordering the town. The show's writers conducted extensive research and visited reservations and towns throughout New York state to create the challenges and situations that come up in the plot. "It was really nice to see people who wanted to make a project where Indians get to be regular people and get to be funny," said Ornelas. "And so we just kept developing. We put this really great, funny, diverse room together."