Federal communications policy has long recognized both the virtue of competition in speeding the rapid deployment of broadband technology and the reality that some areas of the country – whether due to challenging geography or economics – are unable to attract the investment required to support broadband access without targeted government help.  The federal government spends billions of dollars each year through the Connect America Fund and other programs to promote broadband deployment to these unserved areas, so it is critical that these programs work as efficiently and effectively as possible. And the starting point for any effective support program is knowing where service is available and where it is not via an accurate broadband map and data set.

For this reason, we agree with the FCC and members of Congress that the current broadband map must be meaningfully improved. We also believe that a pragmatic approach can yield significant improvements in the shortest timeframe.  That is why NCTA has proposed a solution that can be implemented nationwide very quickly, without any need for a pilot, and would result in the granular data needed to more accurately identify areas that currently are not served by a fixed broadband provider.

Currently, broadband providers report to the FCC a list of the census blocks where they offer service.  While census block reporting works well in densely populated areas where census blocks are small, it can be less effective in rural areas because current FCC rules treat a rural census block as served even if portions of the block are, in fact, unserved, as shown below: 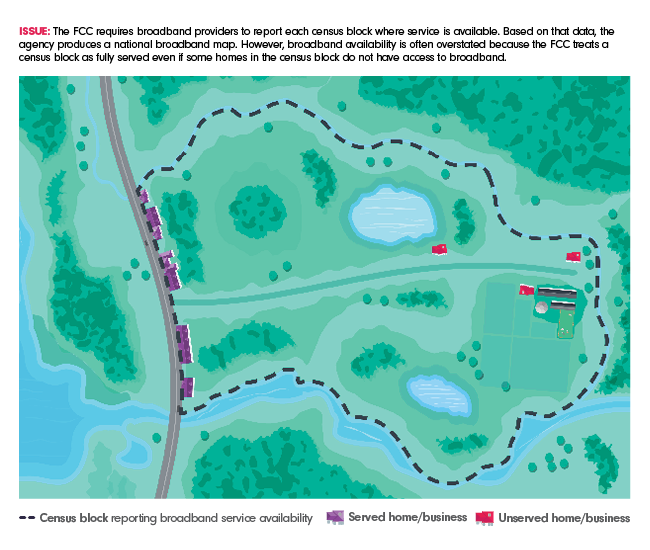 To address this concern, NCTA has proposed that the FCC require a more granular reporting regime in which providers submit shapefiles, which are essentially electronic maps that would show the actual contours of a provider’s service area, as shown here: 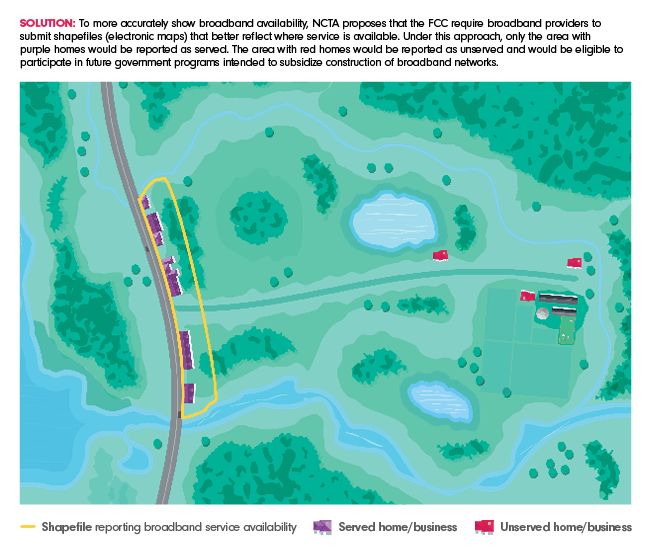 The Commission would then compile these shapefiles into a national map that would clearly identify served and unserved areas.  Shapefiles are a tool that have been used previously by the FCC and other federal and state agencies, so they are familiar to many providers.  For example, the State of Kansas recently released a set of maps based on a similar approach and this experience strongly suggests that the FCC should be able to implement NCTA’s proposed approach without undue time or expense.

To address concerns about providers overstating coverage areas, we are also proposing that the FCC use crowdsourcing to supplement its verification process. Under our proposal, after the FCC publishes maps based on the new reporting regime, consumers and other stakeholders could at any time submit evidence demonstrating potential inaccuracies in the map. A similar approach is included in the bipartisan Improving Broadband Mapping Accuracy Act recently introduced by Senators Capito, Klobuchar, Manchin, and Hoeven.

In addition to providing a clearer sense of the state of broadband availability, the maps that would be produced under NCTA’s proposal also could be combined with existing tools to provide a better sense of precisely where service is still needed. An effort to gather more data regarding unserved locations is also at the heart of a pilot project that will be conducted by our colleagues at USTelecom.  While we look forward to seeing the results of that experiment, we do not think it should cause the Commission to delay consideration and adoption of NCTA’s proposed reforms to the reporting regime.  To the contrary, the Commission should quickly adopt and implement our reporting proposal so that it can produce more accurate data and maps about where broadband is available and use that information to deliver broadband to all Americans.

New FCC Map: Progress on the Journey to Broadband for All