A new report, "Investing in America: The Cable Industry's Economic Impact on People, Infrastructure & Programming" finds that the economic impact by America's cable industry has reached approximately $460 billion. The report by Bortz Media & Sports Group looks at how cable's investment in infrastructure and award-winning programming has reached and affected consumers in nearly every community across the United States. A segment of the report also includes data indicative of the essential role that cable broadband played during the ongoing COVID-19 pandemic in supporting Americans through allowing for remote work, distance learning, tele-medicine, and more.

The decades of investment and innovation made by the cable industry have resulted in the fast and robust broadband services and rich entertainment programming that millions of Americans rely on and enjoy every day. As a result, the growth and competition that the cable industry has fostered has no doubt significantly contributed towards the U.S. economy in many ways.

A few of the report's major findings include:

And even amid the many challenges during the pandemic, as more people worked from home than ever before and students turned to distance learning when schools shut down, the cable industry continued to innovate and bring essential services to its customers. Cable's broadband networks proved resilient during state lockdowns and stay-at-home orders despite the internet traffic surges that reached historic levels. In fact, thanks to the industry's leadership, U.S. fixed broadband speeds vastly exceeded the global average by 83%, with U.S. average download speeds reaching 138 Mbps during the second quarter of 2020. Not only did the industry bolster U.S. economic performance, cable's broadband infrastructure kept the country connected through one of America's most difficult time periods. 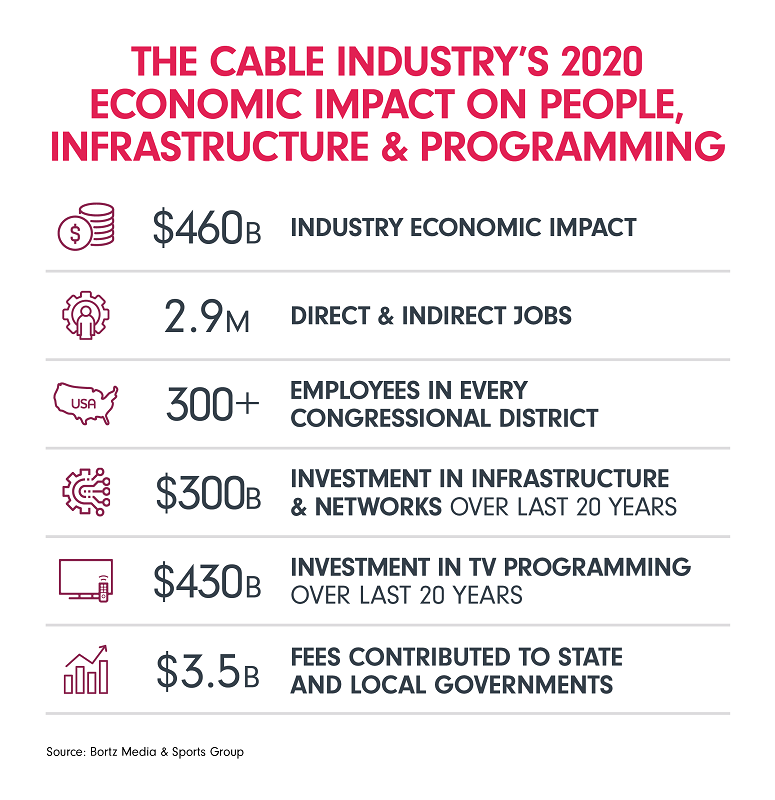 Broadband Highlighted as Household Product Not Hit By Inflation