Building the Next Generation of Cable Leaders

Building the Next Generation of Cable Leaders

Technology and media are constantly changing. Internet speeds get faster, owning multiple internet-enabled devices is now commonplace, watching TV on the go is rampant and programming has never been richer and more exciting. And it’s all thanks to the innovators who come and go, those who challenged convention, shared big ideas, and sparked inspiration, forever changing how people think about and use technology. But how does one continue to foster a crop of big influencers and leaders in an age that can often seem much more fragmented and fickle and when change is constant?

The Cable Center, the nonprofit, educational organization serving the cable industry since 1985, launched a pilot program for emerging leaders in cable earlier this Fall in Denver with this very idea in mind. With the goal being to "pass on the industry's pioneering spirit to a new generation of innovators," the Community of Innovators program aims to not only tell the story of the cable industry (which is why The Cable Center was founded), but to also look to the future.

“A group of us put our heads together a few years ago to think about ways to not only further the cable industry’s unprecedented legacy of innovation but to connect a new generation of young people directly to our history by developing a relevant, hands-on and future-focused program,” said Bridget Baker, who serves on the board of The Cable Center. Baker, CEO of Baker Media and a 23-year veteran of NBCUniversal and co-founder of CNBC, serves as an “Innovation Laureate”—a mentor to program participants. “CableLabs is certainly focused on technical innovations, and creativity can bubble up anywhere, but The Cable Center is uniquely positioned to preserve and promote industry contributions as a whole and to shine a light on and link together a wider community,” Baker further explained.

Joel Tyus, a participant in the 10-week Intrapreneurship Academy that piloted this past Fall and who has worked in the cable industry for the past eight years, said that the program helped him personally to grow projects within his company, Evolution Digital. Tyus is a senior product manager, and previously worked at Time Warner Cable. Participants and mentors in the program were a mix of cable providers, vendors, and programmers from all around the U.S. “The cable industry has been really good to me, and I've enjoyed upward mobility,” said Tyus. The program hopes to inspire this type of motivation and mobility in rising leaders in several ways, such as by helping students deliver a big project or idea pitch to their companies by the conclusion of the program.

Many of the guest speakers throughout the program also served as mentors to students, helping them deliver pitches to their respective employers. Made up of four components, the Community of Innovators aims to invest in cable’s future through its support of the "Innovation Laureates" like Baker; the 10-week Intrapreneurship Academy; Startup Weeks--competitions that encourage local entrepreneurs to connect with cable industry leaders; and The Mavericks Lecture Series--a program where industry leaders share their insights at universities nationwide.

“The cable industry has always been very innovative, and the whole idea behind [the program] is to give participants the power to take risks. The Cable Center itself is a nice asset to have because you can see the history of cable. The museum shows where cable has been and primes people for the future to innovate within cable,” said Tyus. 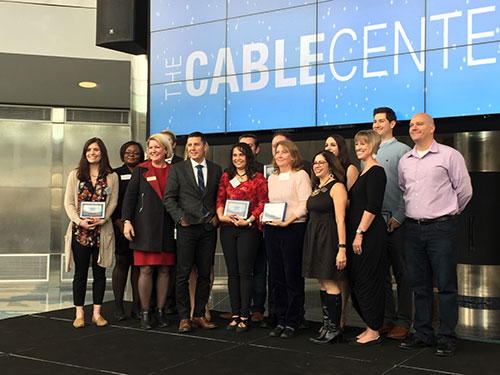