A Conversation with TV One Leaders During Black History Month

A Conversation with TV One Leaders During Black History Month

With Black History Month coming to an end, we checked in with TV One’s General Manager, Michelle Rice, and senior vice president of original programming, D’Angela Proctor. As Rice said during a recent event at NCTA honoring the month, “[TV One] celebrates Black History Month 365 days a year.” During an interview, they shared their take on diversity programming across the television landscape, and what still needs to be done to ensure that African-Americans have a voice at the executive table and ultimately, on the screen. 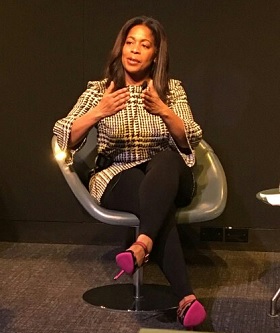 Describe what TV One represents and what it means to you, your colleagues, and viewers.

MR: We represent black culture and we do that in many ways. Number one, we tell authentic stories. We really want to share positive images of black people and people of color, and share some of the more lesser known stories--the unsung heroes that have played an important part in history that we want to share with broader audiences. We pride ourselves on having that authentic voice. We are also the only black-owned television network in existence. Most other companies have been sold and are no longer black-owned. We also have the privilege [as being black-owned] of being black people telling black stories.

How do you stand apart in the programming you produce for African-American audiences?

DP: There's so much competition out there. I think our point of differentiation is, like Michelle said, it's for us, by us. We're extremely proud of that. A lot of networks have moved away from embracing music as a part of their culture, or their programming dynamic. But for TV One, music is in our DNA. Having come from Radio One, we always go back and touch our music and radio roots. One example--we just premiered a show called Uncensored, that features pop culturist entertainers, and a lot of them are musicians and in the music business. It's a companion piece to our signature franchise series, Unsung, which is about musical artists who have not gotten their just dues in the mainstream.

Where does the television industry stand when it comes to diversity programming?

MR: We are making strides, but it's still not enough. If you look at the population of the world, it's predominantly people of color. I think the stories we tell should reflect the audience. Considering the large percentage of people of color in the world, there are definitely not enough of their stories being told on television, or enough positive images being shown. What you've seen are immersion platforms and networks that are targeted to focus on those audiences tell those stories. But when you look at mainstream (broadcast television, for one], which is pervasive, there are still not enough images to reach the masses of people that watch TV. That's where we are still falling short. That's why you don't see a lot of African-Americans or people of color represented at awards shows. If the dominant media networks that reach everyone really pushed through and made that effort, then we might see a little bit more change.

I think that it would behoove the business to look at the Rooney rule [named after Dan Rooney, former owner of the Pittsburgh Steelers, who shepherded a rule through the NFL]. Whenever there is a coaching position available on a team, it's required to have a person of color as a candidate. That person may not get the job, but it forces the person doing the hiring to actually consider people of color who are qualified and deserving of being at the table. Under that rule, there has been an increase in black coaches. The same needs to happen in the studio, on the television, and even at the showrunner level. When you're making shows, bring somebody of color to the table to interview. They may not be appropriate for that position, but you'll get to know them and you might bring them in for something else, or bring them in at a different time. [It's a strategy] that really nurtures talent on an executive level.

National Geographic Showrunners Share How They Film in a COVID World
August 04, 2020